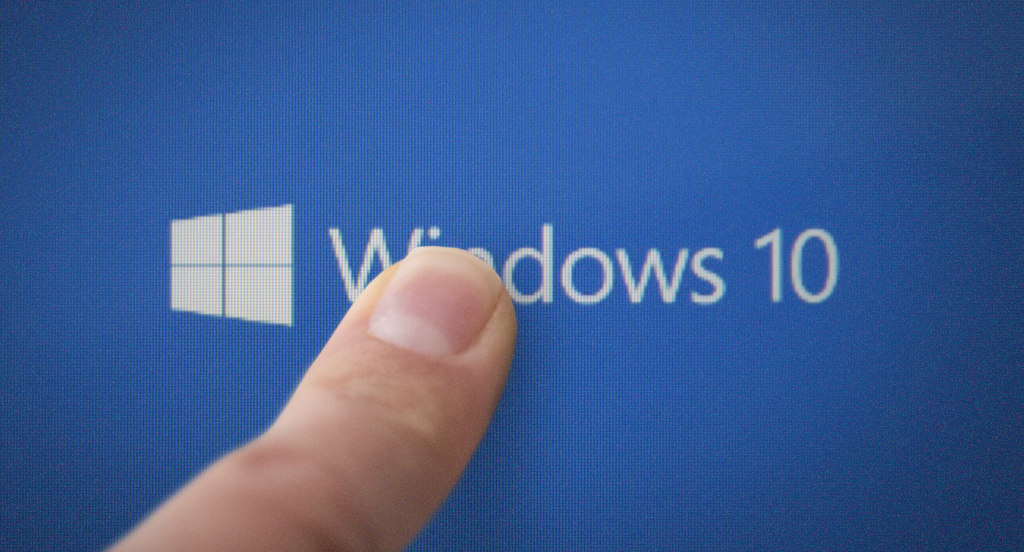 Virtual Private Networks (VPNs), create secure connections to any other network via the internet. A VPN is typically used for accessing websites that are restricted to specific regions and shielding browsing activity from anyone when using public Wi-Fi.

VPNs are all the rage nowadays, but the reasons had changed from when they were created. They were initially used to connect a business network over the internet securely and allow business networks to be accessed from home.

A VPN forwards all network traffic, thus allowing local network resources to be accessed remotely and Internet censorship to be bypassed. VPN support is included in most operating systems nowadays.

What Is a VPN?

The best VPNs work on all Windows devices like PCs, smartphones, and tablets. The connect them another computer (known as a server) on the internet. This allows the internet to be browsed using the Windows VPN server’s internet connection. If the server is located in another country, it will look as if you are in that country, enabling you to access sites that you would typically not be able to.

How Does a VPN Help Me?

VPNs can be used for:

Most people nowadays use VPNs to bypass geographic restrictions to access content in different countries and torrenting. Although they remain useful to protect yourself while accessing the internet at a public place like a restaurant, this is not the primary use for VPNs anymore.

When any device such as computers, smartphones, or tablets are connected to a VPN, the device performs as if it is on the VPN’s network. All network traffic is routed to the VPN over a secured connection.

Since the device acts as if it is on the VPN’s network, this enables users to use any local network resource securely, even while you’re at a totally different geographical location. You will, therefore, be allowed to browse the internet as if you’re actually at the physical location of the VPN.

This is beneficial if you want to use a public Wi-Fi network or want access to websites which impose geographical restrictions.

The device contacts websites through your VPN connection that is encrypted. The Windows VPN will forward requests from you and then uses the secure link to transmit responses back from the website to you. When you use a VPN based in the U.S. to connect to Netflix, the site will believe the connection is coming from the U.S.

Connecting to a VPN with Windows

Connecting to VPNs is very easy to do because Windows offers built-in support, as do most other operating systems. There are two ways you can proceed, by using a commercial product or by using one of the free Windows VPN options.

First, the commercial route. There are several top VPN providers have their own client software. In this case, you don’t need to use the process described in this guide. Among what are considered the best VPNs for Windows are CyberGhost and NordVPN for anyone just starting out, as well as PureVPN for more advanced VPN users. 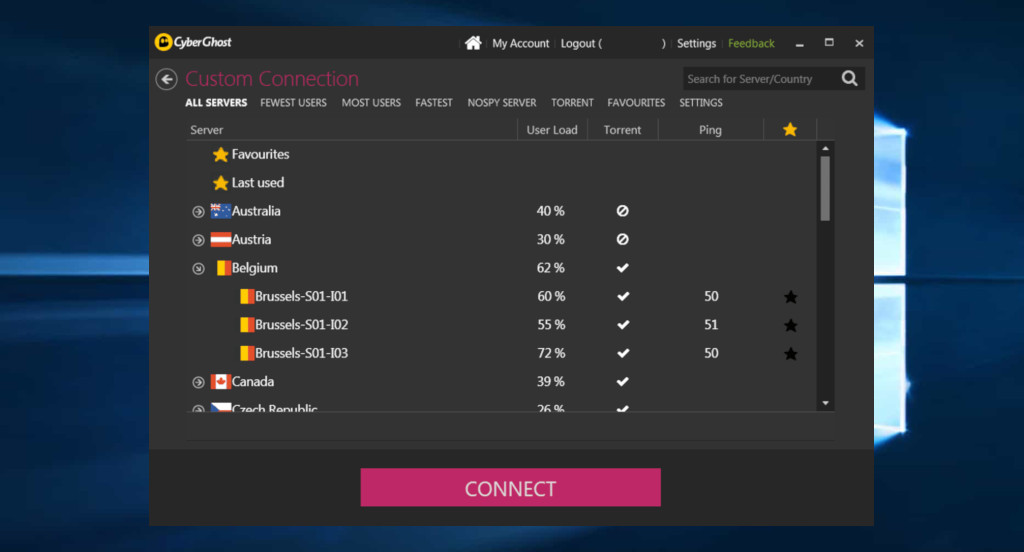 These providers have their own desktop applications to connect to their VPN network and selecting the location of a server.

To connect to a VPN with Windows 7 and 8, press the Windows key, type VPN, and then press Enter. Although the process described here is specifically for Windows7, it is similar for Windows 8, although some screens will look different. 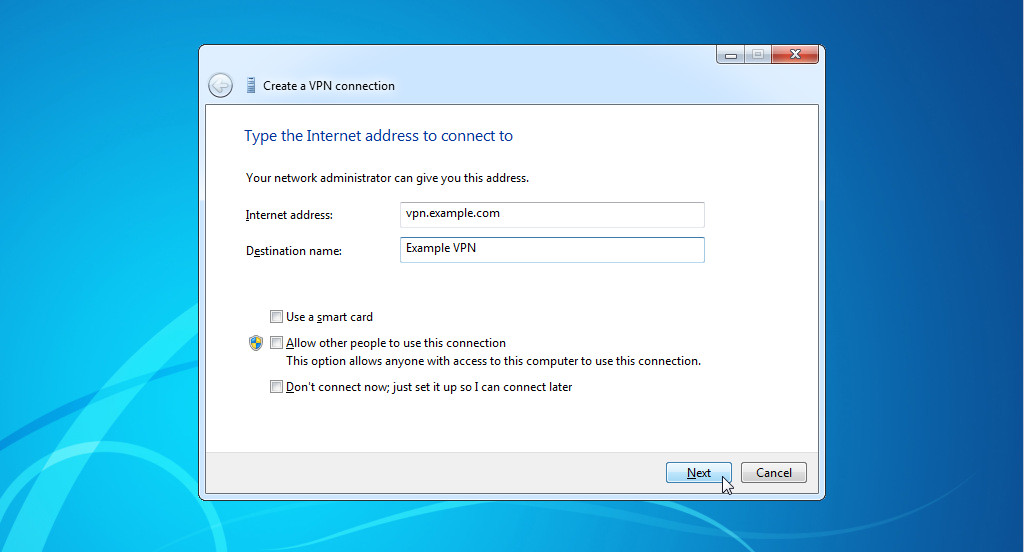 Enter a Destination name. This can be anything as it is only used to help you distinguish between different VPN connections.

Enter the login credentials by using the username and password provided by the best Windows VPN provider you have picked. 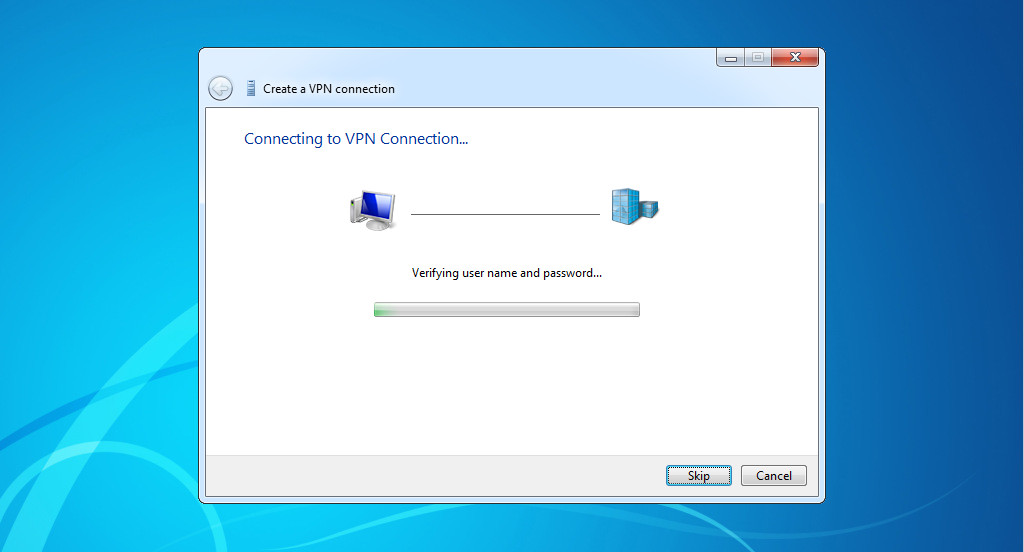 Windows should now connect to the VPN unless you’ve checked the “Don’t connect now“ checkbox. The VPN connection will be saved so you can easily connect again later.

Clicking the network icon in the system tray will show the VPN connections while connected. All network traffic will be sent over the VPN while you’re connected to it.

Windows 10 supports IKEv2, SSTP, L2TP/IPsec, and PPTP connections without having to use any external software. 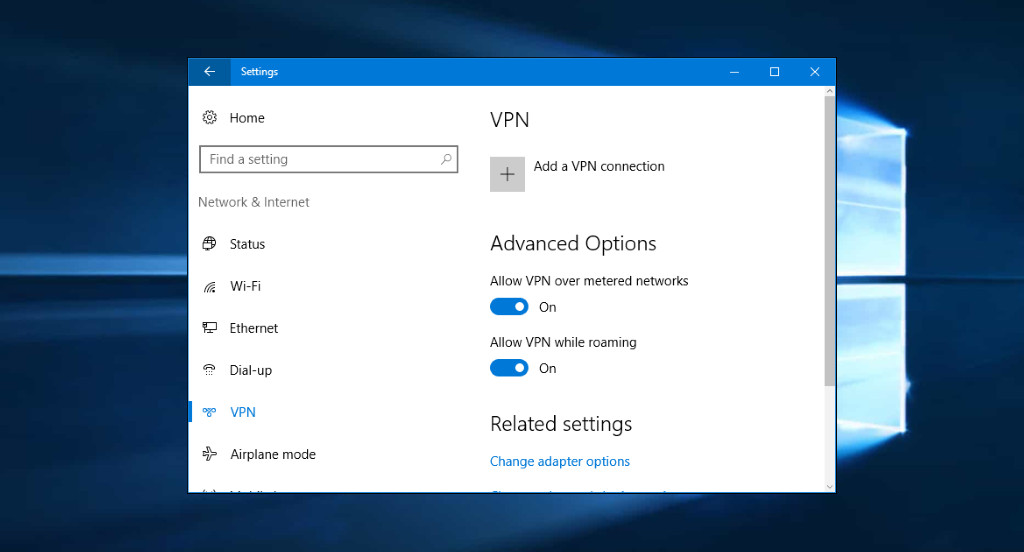 To use Windows 10 to connect to a VPN, go to Settings -> Network & Internet -> VPN, and select the “Add a VPN connection” option.

Enter the connection details for the VPN. The “Connection Name” can be anything as this is only used by the computer to help you identify various VPN connections.

Every top Windows VPN providers will supply you with all the details you require. If it is an employer’s VPN, the system administrator or IT department will be able to provide the connection details.

Once the VPN has been configured, the network popup menu will appear next to the list of Wi-Fi networks the computer has picked up. 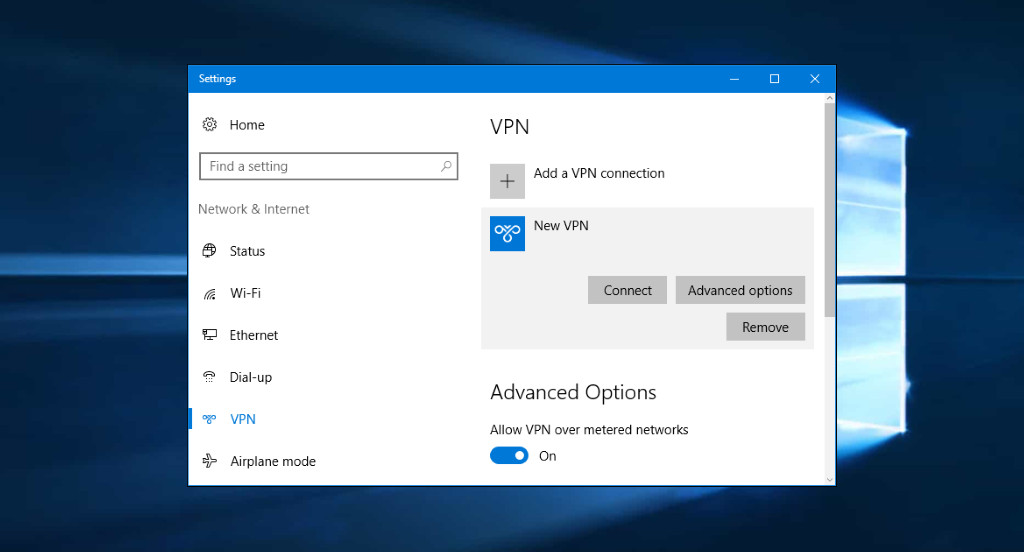 Clicking the VPN Connection Name in the popup menu will open the Settings > Network & Internet > VPN window. To connect to a VPN, select it and click “Connect.” VPN connections can also be configured and removed from here.